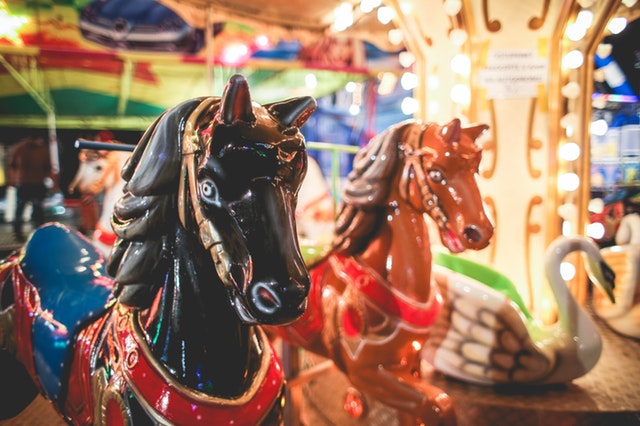 Setting Free the Kites is a wonderfully engaging story of two boys and their families.  This reader experienced a range of emotions as the boys and their families struggle with devastating losses and the turbulence of the teen age years.  The reader is obliquely offered some universal questions to consider although the author provides us no answers.   Perfect.

Robert Carter has lived in this particular coastal Maine town all of his life.  His father took over running the amusement park his father started in 1946 after his father died of a heart attack in 1959 while taking the first roller coaster ride of the day, in the first car, as was his habit.  While his father hadn’t wanted anything to do with the amusement park and got none of the kind of joy from the park that his father did, Robert’s father develops his own passion for the park with respect to keeping everything running and carving new horses for the carousel as old ones needed replacing.

The most important aspect of Robert Carter’s family’s life, however, is that his older brother, Liam, has Duchenne muscular dystrophy which is slowly destroying his muscles and will eventually lead to his premature death.   Robert’s mother was pregnant with him when they learned of Liam’s diagnosis, that the disease is hereditary, and that if the fetus she carried now was a boy there was a 50-50 chance he would have the disease as well.  Fortunately Robert develops normally as his brother continues to decline.  “As she [Robert’s mother] lifted her wreck of a son in and out of the bathtub each night, my mother knew that there was a world of grief to come, but at least the scope of the tragedy was finite now.”

Even at three Robert knew that his parents treated Liam differently than they treated him.  His father painted a dazzling mural across Liam’s wall—a dramatic jungle panorama.  “I knew I should not complain, should not begrudge my brother this one small thing.  But I ardently, secretly wished that my father would paint my bedroom wall, too.”  The family tolerates Liam’s love of current (1976) punk rock played at ear-breaking levels and appreciates that he “threw himself into everything”:  directing the school musical, learning the clarinet, even applying for colleges they knew that likely he would not attend.  His parents treat every annual event including Christmas and his birthday as if it were the last one, which they knew that one would eventually be.  When they finally lose Liam, “we stumbled out into the rest of our lives.” Robert’s father eventually moves into his repair shed, his mother withdraws from life as well for some time, and Robert is left to figure things out on his own.

But we learn all of this about Robert’s family after we meet Nathan Tilly and his father on Robert’s first day of eighth grade.  Robert learns that the bully that tormented him relentlessly the prior year was not promoted to ninth grade and the high school building but rather will be available to continue bullying him again this year.  Nathan, a new kid in town recently moved from Texas to a house outside of town right on the coast, finds Hollis dunking Robert’s head in a toilet in the locker room and rescues him.  Robert, Nathan, Hollis, Robert’s mother and Nathan’s father meet with the principal and, despite Robert’s discomfort, Nathan makes it clear that Hollis was bullying Robert.  Nathan’s father presses the principal to address the bullying problem.   The next day Robert learns that Hollis was belatedly promoted to ninth grade and won’t be available to bully Robert and that Nathan should be thanked for his actions.  Nathan and Robert ride their bikes to Nathan’s house for the promised celebratory ice cream Nathan’s father offered the day before.  When they arrive, Nathan’s father is flying a kite while perched on the roof of their house.  When he waves hello to the boys, he slips and falls to the ground.  He lives long enough to tell Nathan that he flew his kite on the roof so he could watch his wife as she walked on the beach in front of their house.  So by page 29 and the end of chapter 3, an outsider has rescued Robert from bullying and that outsider’s family has suffered a shocking, premature death.

We quickly learn that Nathan’s mother spends most of her time in her study, typing.  Nathan isn’t sure she even puts paper in the typewriter but he certainly hears her typing all of the time while chain smoking.  We also learn that Nathan and his father were very close and went on many interesting exciting adventures.  By the end of chapter 5 and page 48 Nathan and Robert have become good friends and are setting free the kites Nathan’s father made in his workshop.

The rest of the novel follows Nathan and Robert as they progress through the rest of the 1976/77 school year, the 1977 summer, during which Nathan and Robert join the seasonal workforce at Robert’s family’s amusement park and Nathan develops a crush on Faye, a high school girl, the fall of 1977 when Liam passes, the summer of 1978 when the boys have new jobs at the amusement park and Nathan’s crush on Faye continues.  There are a few flashbacks to fill in the story of Robert’s family’s amusement park and the story of Lewis, a handy-man at the park with whom the boys develop a friendship.  I won’t give away more of the story.

Robert is our narrator.  Much of the novel deals with death and loss.  He directly experiences Nathan’s father’s untimely and violent death, how the mother responds at the death scene, and some of how Nathan reacts to the loss.  Robert provides us much more detail about the huge loss of Liam.  He can tell us directly about how he feels about the loss and his reactions to his parents’ grief.  He can also tell us about the feelings he has as he and Nathan experience their adolescent summers.  George’s portrayal of Robert is very convincing.  We hear about Robert’s jealousy of the different treatment he and Liam get from their parents and the simultaneous understanding of why that is so.   Robert also admits to us that he is unhappy about Nathan’s crush on Faye—Nathan’s obsession with Faye means he has less time and energy for Robert.

George is effective in helping us feel the impact of the unexpected death of Nathan’s father and the expected but devastating death of Liam.  Readers who are parents are likely to feel confronted with the realization of how unevenly we treat our children while we likely tell them we love them all equally,   about the secrets we keep from them, and about our incapability to shield them from the pain and suffering we feel when we lose a child.

George’s use of an amusement park as Robert’s family business is very interesting.  The relationships each Robert’s grandfather, father, and Robert have with the business—at least through Robert’s narrator eyes—are very different.  George, through Robert, comments on the role the business plays in the economy of the area.  In addition, the amusement park provides a convenient setting for progressing the Nathan/Faye relationship and the continuing relationship of Hollis with the boys.  This was very skillfully done.

Apparently Robert’s name came from a character naming auction benefitting a charity.  I understand why someone would enjoy having their name associated with a book by this author and I look forward to more of his work.